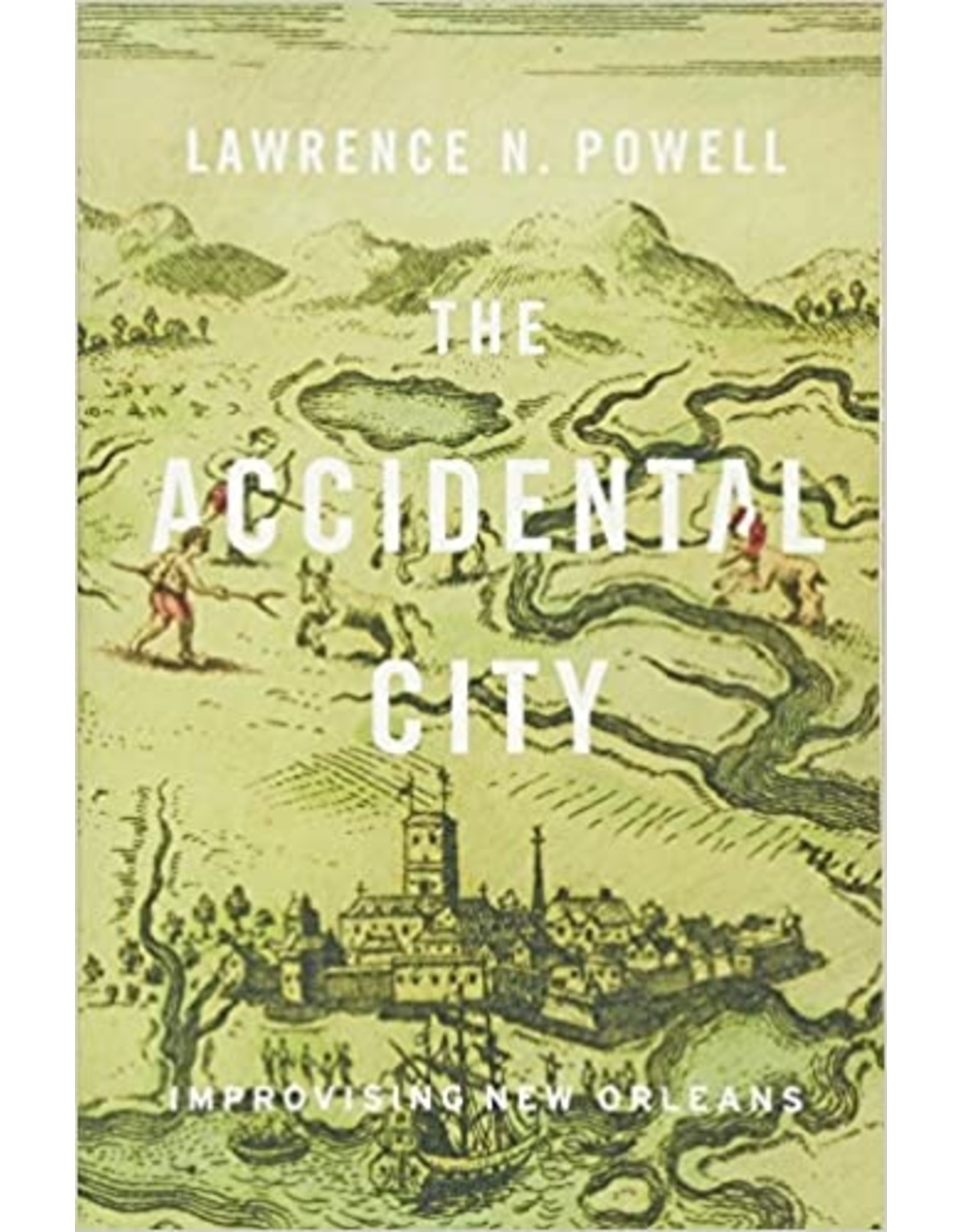 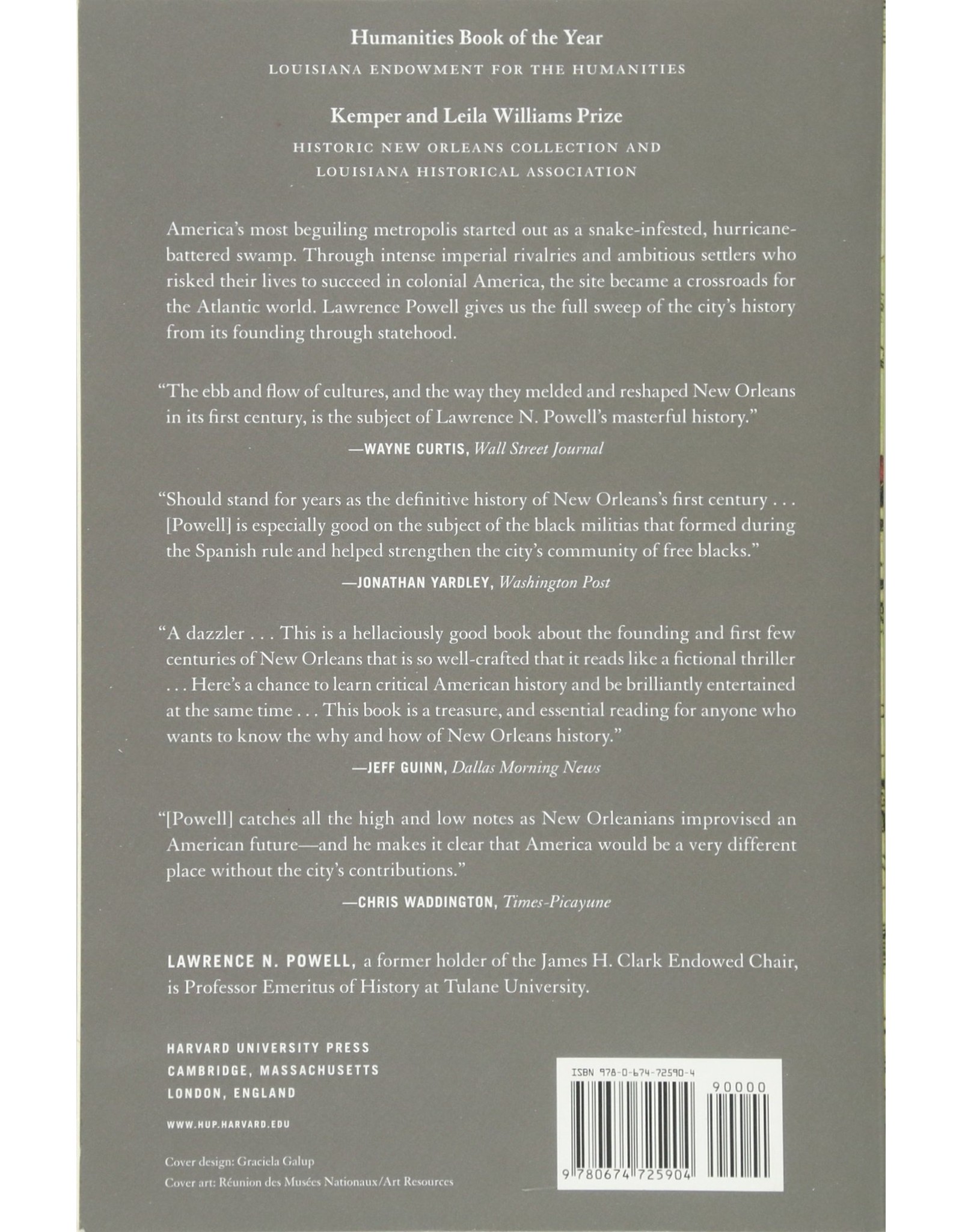 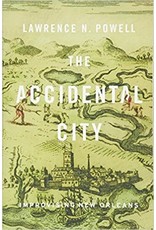 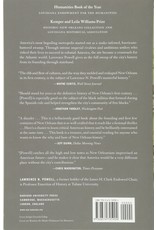 This is the story of a city that shouldn't exist. In the seventeenth century, what is now America's most beguiling metropolis was nothing more than a swamp: prone to flooding, infested with snakes, battered by hurricanes. But through the intense imperial rivalries of Spain, France, and England, and the ambitious, entrepreneurial merchants and settlers from four continents who risked their lives to succeed in colonial America, this unpromising site became a crossroads for the whole Atlantic world.

Lawrence N. Powell, a decades-long resident and observer of New Orleans, gives us the full sweep of the city's history from its founding through Louisiana statehood in 1812. We see the Crescent City evolve from a French village, to an African market town, to a Spanish fortress, and finally to an Anglo-American center of trade and commerce. We hear and feel the mix of peoples, religions, and languages from four continents that make the place electric-and always on the verge of unraveling. The Accidental City is the story of land-jobbing schemes, stock market crashes, and nonstop squabbles over status, power, and position, with enough rogues, smugglers, and self-fashioners to fill a picaresque novel.

Powell's tale underscores the fluidity and contingency of the past, revealing a place where people made their own history. This is a city, and a history, marked by challenges and perpetual shifts in shape and direction, like the sinuous river on which it is perched.

“Should stand for years as the definitive history of New Orleans’s first century… Powell’s account of New Orleans’s racial history is extensive; he is especially good on the subject of the black militias that formed during the Spanish rule and helped strengthen the city’s community of free blacks.”―Jonathan Yardley, Washington Post

“The ebb and flow of cultures, and the way they melded and reshaped New Orleans in its first century, is the subject of Lawrence N. Powell’s masterful history… It’s an account of how an improbable city came to be and then survived through its own determination and the flexible social and political structures of its first inhabitants… In his telling, Powell deftly manages to bring historic personages to life with a few well-chosen words… Like the city itself, [the book] is a successful hybrid, filled with well-rendered writing that doesn’t preen.”―Wayne Curtis, Wall Street Journal

“A dazzler… This is a hellaciously good book about the founding and first few centuries of New Orleans that is so well-crafted that it reads like a fictional thriller. The rich history of the city and its swampy environs offers Powell an eclectic cast and a kaleidoscopic series of events to chronicle, and he takes full advantage. Here’s a chance to learn critical American history and be brilliantly entertained at the same time… This book is a treasure, and essential reading for anyone who wants to know the why and how of New Orleans history.”―Jeff Guinn, Dallas Morning News

“[Powell] catches all the high and low notes as New Orleanians improvised an American future―and he makes it clear that America would be a very different place without the city’s contributions.”―Chris Waddington, Times-Picayune

“[Powell’s] book addresses the reasons New Orleans has survived and thrived, against impossible odds, and what makes this ‘accidental’ city so fascinating and precious… Powell’s brilliant study meticulously traces the story of the city’s founding in a swamp and its first century of growth into an extraordinary hybrid Indian-European-Caribbean-African-American place… The narrative traces the early French settlers’ conflicts and relationships with Indians, slaves and free people of color around the settlement and its architectural designs, through the short but significant period of Spanish rule, and finally to the famous Louisiana Purchase and American political, though never social and cultural, domination. It documents with compelling detail and anecdote the disputes and compromises involved in the settlement’s design and post-conflagration rebuilt versions, and illuminates the complex history of the city’s smuggling, tripartite racial order, slave and free population and African-American ‘cultural creation,’ metissage (race mixing), marronnage (fugitive slaves), Creolization and hybrid religions (notably Catholicism and voodoo)… This will become the definitive study of New Orleans’ early history. When, I ask impatiently, can we read Powell on the next two centuries of this ‘accidental’ city’s life?”―Helen Taylor, Times Higher Education

“A superb book by one of America’s foremost living historians.”―Simon Caterson, The Australian

“[The Accidental City] is one of the finest regional American histories I have encountered in a long time, a delight to anyone with even the faintest curiosity about how our nation became itself… [A] marvelous book.”―Charles C. Mann, The Daily

“Powell has composed a comprehensive early history of the Crescent City in The Accidental City: Improvising New Orleans. Beginning with La Salle, Bienville and Iberville’s early forays on the wild Mississippi River―the ‘Impossible River,’ as Powell christens his first chapter―he leads us through over a century of rambunctious colonialism, delving into trade disputes, shifting economies and race relations, all the way through the growing pains of the Louisiana Territory.”―Alex Gecan, New Orleans Magazine

“[The Accidental City] provided for me the back story to anything I’ve ever wondered about in our enigmatic city… [The book displays] Powell’s copious research, his penetrating insights, his wry humor and poetic turns of phrase.”―Orissa Arend, New Orleans Tribune

“Most visitors to New Orleans know it is a magical city. But ‘accidental’? A strange word, but appropriate, according to this fascinating account of the origin and history of what the author describes as ‘America’s only original contribution to world culture.’… The heart of this story lies in the rich chapters devoted to the African-Americans who came as slaves. Many of them attained their freedom because they held the city together through their strength and ingenuity. From the three-tiered culture that developed―white planters, free blacks and slaves―grew the cuisine and music that make New Orleans the queen of the delta.”―Kathleen Daley, Newark Star-Ledger