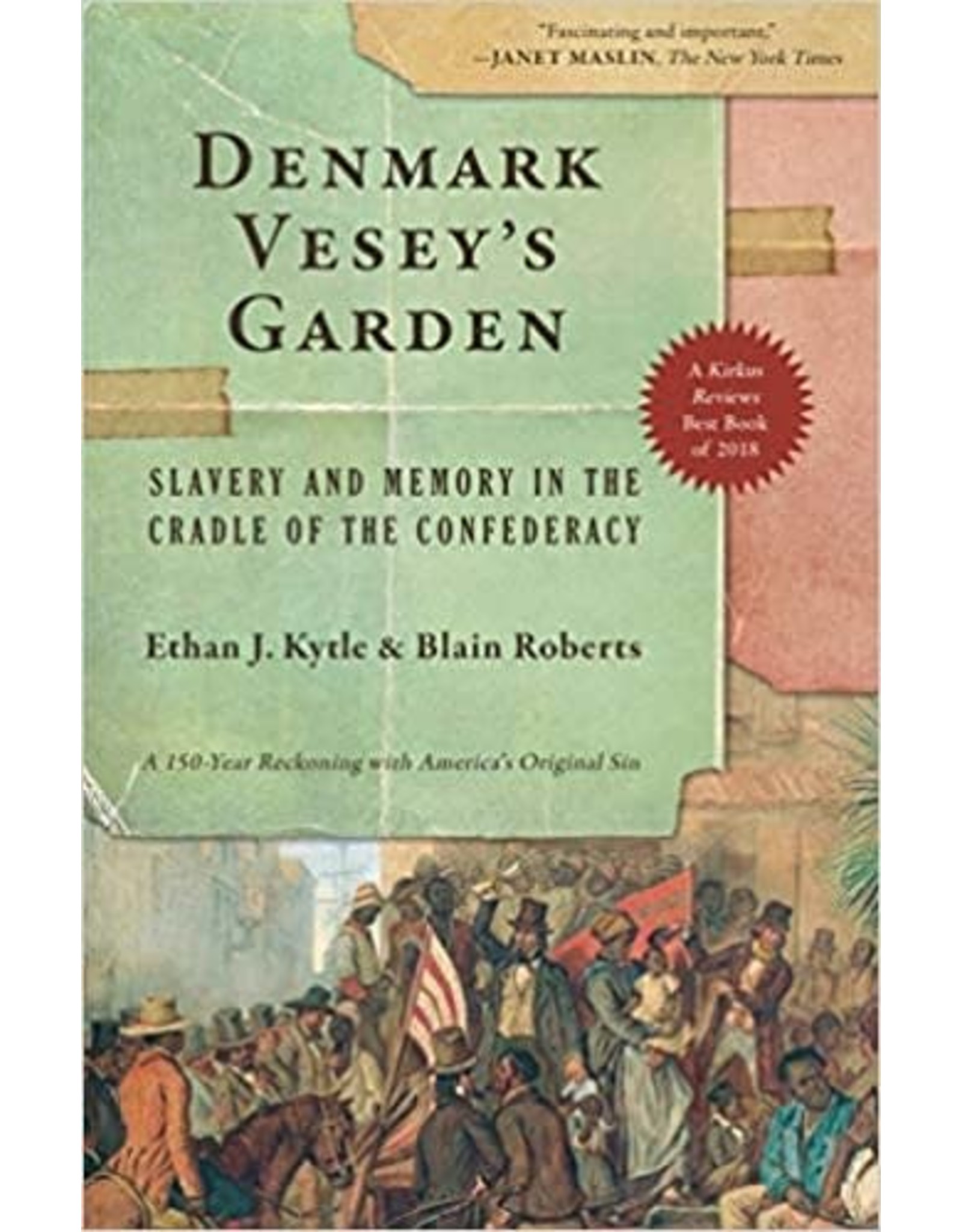 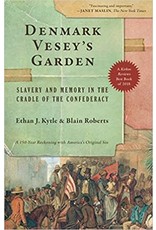 One of Janet Maslin’s Favorite Books of 2018, The New York Times

One of John Warner’s Favorite Books of 2018, Chicago Tribune

The stunning, groundbreaking account of “the ways in which our nation has tried to come to grips with its original sin” (Providence Journal)

Hailed by the New York Times as a “fascinating and important new historical study that examines . . . the place where the ways slavery is remembered mattered most,” Denmark Vesey’s Garden “maps competing memories of slavery from abolition to the very recent struggle to rename or remove Confederate symbols across the country” (The New Republic). This timely book reveals the deep roots of present-day controversies and traces them to the capital of slavery in the United States: Charleston, South Carolina, where almost half of the slaves brought to the United States stepped onto our shores, where the first shot at Fort Sumter began the Civil War, and where Dylann Roof murdered nine people at Emanuel A.M.E. Church, which was co-founded by Denmark Vesey, a black revolutionary who plotted a massive slave insurrection in 1822.

As they examine public rituals, controversial monuments, and competing musical traditions, “Kytle and Roberts’s combination of encyclopedic knowledge of Charleston’s history and empathy with its inhabitants’ past and present struggles make them ideal guides to this troubled history” (Publishers Weekly, starred review). A work the Civil War Times called “a stunning contribution, ” Denmark Vesey’s Garden exposes a hidden dimension of America’s deep racial divide, joining the small bookshelf of major, paradigm-shifting interpretations of slavery’s enduring legacy in the United States.

Praise for Denmark Vesey’s Garden:
One of Janet Maslin’s Favorite Books of 2018, The New York Times

One of John Warner’s Favorite Books of 2018, Chicago Tribune

A Kirkus Reviews Best Book of 2018

“Those who dismiss contemporary opposition to the Calhoun Monument as misplaced ‘political correctness,’ need to read Denmark Vesey’s Garden, which shows the deep provenance of black Charlestonian’s opposition to both Calhoun the man and the symbol.”
—The Post and Courier (Charleston)

“A fascinating and important new historical study. Denmark Vesey’s Garden: Slavery and Memory in the Cradle of the Confederacy, by Ethan J. Kytle and Blain Roberts, examines Charleston as the capital of slavery in the United States and, therefore, the place where the ways slavery is remembered matter most. This book examines rival sets of memories: from a segregated tourism industry, which not long ago gave out different sets of information to different people, to today’s fights over Civil War monuments.”
—Janet Maslin, The New York Times

“Denmark Vesey’s Garden: Slavery and Memory in the Cradle of the Confederacy is vital to understanding some of the deepest fault lines in American life. . . . An excellent history of the divergent views of slavery.”
—Shelf Awareness

“A stunning contribution to the historiography of Civil War memory studies [that link] the memories and actions of black and white Charlestonians over the years to the present-day ideas motivating extremists like Dylann Roof. . . . This book speaks to the present as eloquently as it narrates the past.”
—Civil War Times

“The authors do an excellent job of tracing and exploring those competing visions [of slavery]. . . enriched by insightful analyses. . . . Those who read it will not just learn how the institution has been remembered but also wrestle with the ramification of America’s slave past for its present and future.”
—Civil War Book Review

“A timely, well-researched, and deftly argued intervention with both scholarly and public importance.”
—Tropics of Meta

“[A] timely look at America’s contested past. . . . Strongly recommended for anyone interested in or hoping to understand more about southern history, especially the ongoing debate over the representation of slavery and the Confederacy.”
—Library Journal

“Kytle and Robert’s combination of encyclopedic knowledge of Charleston’s history and empathy with its inhabitants’ past and present struggle make them ideal guides to this troubled history.”
—Publishers Weekly (starred review)

“Denmark Vesey’s Garden uses the small place of Charleston, South Carolina, to tell a large tale, what we remember of history and what we prefer to forget. It is a fascinating and unflinching performance, showing that all of American history can inhabit a few greying square miles.”
—Edward Ball, National Book Award–winning author of Slaves in the Family

“Nothing has shaped this nation more than slavery and its legacy. Kytle and Roberts’s meticulous research, compelling writing, and thoughtful analysis are vital to our nation at a time when we were haunted by a history we need to understand more deeply.”
—Bryan Stevenson, New York Times bestselling author of Just Mercy: A Story of Justice and Redemption

“Denmark Vesey’s Garden reveals that the long struggle over how Americans remember slavery has been inseparable from the long struggle for racial justice.”
—Ibram X. Kendi, National Book Award–winning author of Stamped from the Beginning: The Definitive History of Racist Ideas in America

“Ethan Kytle and Blain Roberts remind us that the cost of whitewashing the history of racial enslavement and its legacies continues to be too great a burden to bear for American democracy. For any reader interested in current political debates over Civil War memory and monuments, this book is a must-read.”
—Manisha Sinha, Frederick Douglass Book Prize–winning author of The Slave’s Cause: A History of Abolition

“Denmark Vesey’s Garden will have enormous implications for the entire country.”
—Douglas Egerton, author of Year of Meteors, Thunder at the Gates, and The Wars of Reconstruction

“Readers are drawn into a community where the shadows of slavery are ever-present and white and black Charlestonians jockey for influence over whether and how those shadows are acknowledged.”
—Fitzhugh Brundage, William B. Umstead Distinguished Professor, University of North Carolina

“Kytle and Roberts’s engaging style will remind readers of Edward Ball’s work, Slaves in the Family, providing a new window onto the Charleston past and delivering an important message for the present.”
—Catherine Clinton, Denman Chair of American History, University of Texas, San Antonio, and president, Southern Historical Association

“Nuanced, beautifully written, and well researched, Denmark Vesey’s Garden will interest specialized scholars, graduate and undergraduate students, and ordinary readers who want to understand how the slave past shapes debates on race in the United States. For scholars working on the memory of slavery in other parts of the Atlantic world, this book provides a landmark to develop comparative studies and is also a rich model to be followed.”
—Ana Lucia Araujo, The American Historical Review

Ethan J. Kytle is a professor of history at California State University, Fresno. The co-author, with Blain Roberts, of Denmark Vesey’s Garden (The New Press) and the author of Romantic Reformers and the Antislavery Struggle in the Civil War Era, he lives in Fresno, California.

Blain Roberts is a professor of history at California State University, Fresno. The co-author, with Ethan J. Kytle, of Denmark Vesey’s Garden (The New Press) and the author of Pageants, Parlors, and Pretty Women, she lives in Fresno, California.
Add your review
0 stars based on 0 reviews
Add to wishlist / Add to compare / Print