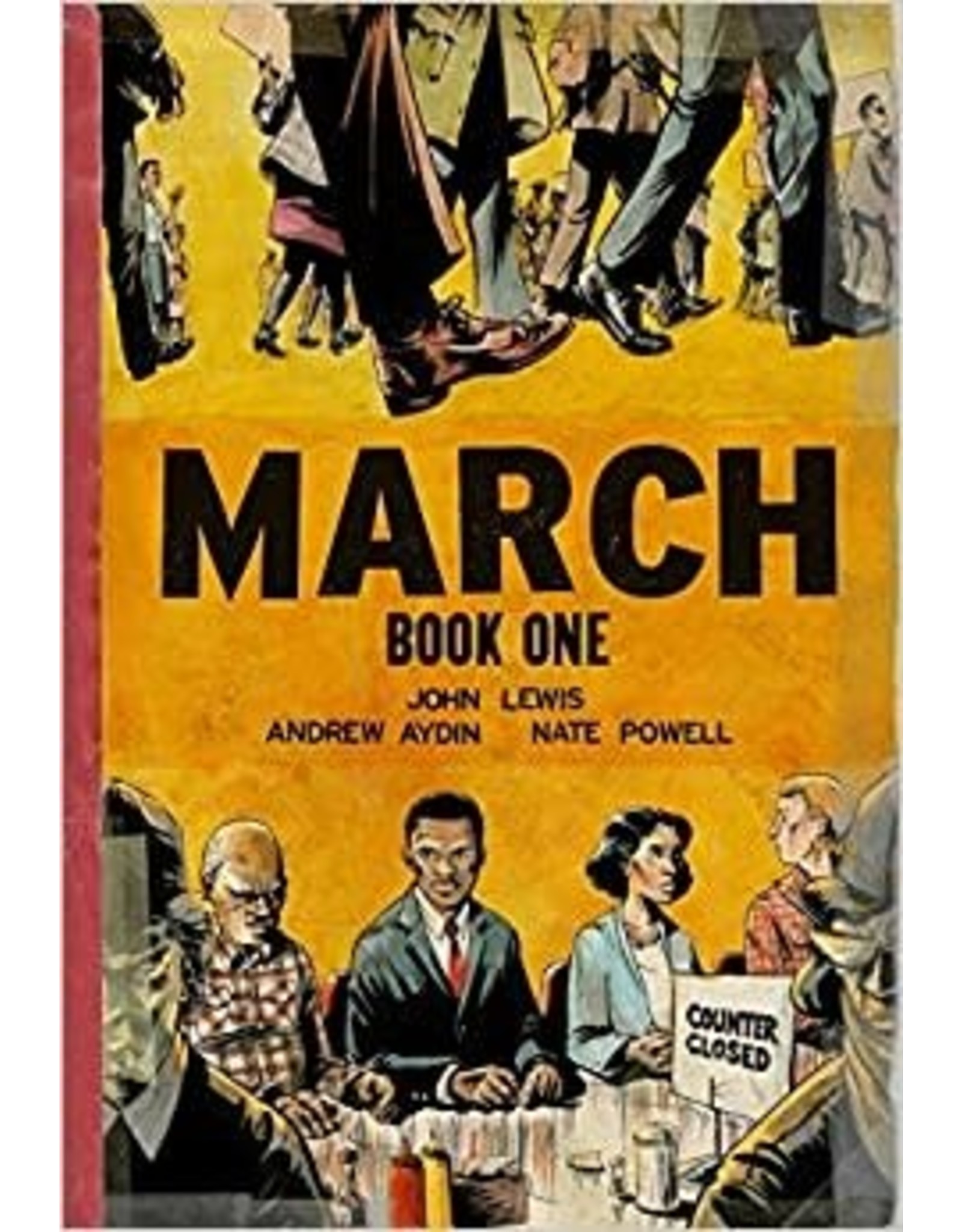 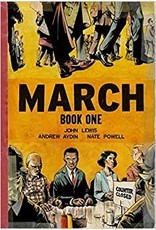 Congressman John Lewis (GA-5) was an American icon, one of the key figures of the civil rights movement. His commitment to justice and nonviolence took him from an Alabama sharecropper's farm to the halls of Congress, from a segregated schoolroom to the 1963 March on Washington, and from receiving beatings from state troopers to receiving the Medal of Freedom from the first African-American president.

March is a vivid first-hand account of John Lewis' lifelong struggle for civil and human rights, meditating in the modern age on the distance traveled since the days of Jim Crow and segregation. Rooted in Lewis' personal story, it also reflects on the highs and lows of the broader civil rights movement.

Book One spans John Lewis' youth in rural Alabama, his life-changing meeting with Martin Luther King, Jr., the birth of the Nashville Student Movement, and their battle to tear down segregation through nonviolent lunch counter sit-ins, building to a stunning climax on the steps of City Hall.

Many years ago, John Lewis and other student activists drew inspiration from the 1958 comic book "Martin Luther King and the Montgomery Story." Now, his own comics bring those days to life for a new audience, testifying to a movement whose echoes will be heard for generations.

Gr 8 Up–Beginning with a dream sequence that depicts the police crackdown on the 1965 Selma-Montgomery March, this memoir then cuts to Congressman John Lewis's preparations on the day of President Obama's inauguration. Lewis provides perspective on the occasion, explaining and describing his own religious and desegregationalist origins in Alabama, his early meeting with Dr. King, and his training as a nonviolent protester. The bulk of the narrative centers around the lunch counter sit-ins in 1959 and 1960 and ends on the hopeful note of a public statement by Nashville Mayor West. The narration feels very much like a fascinating firsthand anecdote and, despite a plethora of personal details and unfamiliar names, it never drags. Even with the contemporary perspective, the events never feel like a foregone conclusion, making the stakes significant and the work important. The narration particularly emphasizes the nonviolent aspect of the movement and the labor involved in maintaining that ideal. The artwork is full of lush blacks and liquid brushstrokes and features both small period details and vast, sweeping vistas that evoke both the reality of the setting and the importance of the events. This is superb visual storytelling that establishes a convincing, definitive record of a key eyewitness to significant social change, and that leaves readers demanding the second volume.–Benjamin Russell, Belmont High School, NHα(c) Copyright 2013. Library Journals LLC, a wholly owned subsidiary of Media Source, Inc. No redistribution permitted.

*Starred Review* Congressman Lewis, with Michael D’Orso’s assistance, told his story most impressively in Walking with the Wind (1998). Fortunately, it’s such a good story—a sharecropper’s son rises to eminence by prosecuting the cause of his people—that it bears retelling, especially in this graphic novel by Lewis, his aide Aydin, and Powell, one of the finest American comics artists going. After a kicker set on the Edmund Pettus Bridge in Selma, Alabama, on March 7, 1965 (the civil rights movement’s Bloody Sunday), the story makes January 20, 2009 (President Obama’s inauguration) a base of operations as it samples Lewis’ past via his reminiscences for two schoolboys and their mother, who’ve shown up early at his office on that milestone day for African Americans. This first of three volumes of Lewis’ story brings him from boyhood on the farm, where he doted over the chickens and dreamed of being a preacher, through high school to college, when he met nonviolent activists who showed him a means of undermining segregation—to begin with, at the department-store lunch counters of Nashville. Powell is at his dazzling best throughout, changing angle-of-regard from panel to panel while lighting each with appropriate drama. The kineticism of his art rivals that of the most exuberant DC and Marvel adventure comics—and in black-and-white only, yet! Books Two and Three may not surpass Book One, but what a grand work they’ll complete. --Ray Olson

"An astonishingly accomplished graphic memoir that brings to life a vivid portrait of the civil rights era, Lewis' extraordinary history and accomplishments, and the movement he helped lead... its power, accessibility and artistry destine it for awards, and a well-deserved place at the pinnacle of the comics canon." - NPR

"Congressman John Lewis has been a resounding moral voice in the quest for equality for more than 50 years, and I'm so pleased that he is sharing his memories of the Civil Rights Movement with America's young leaders. In March, he brings a whole new generation with him across the Edmund Pettus Bridge, from a past of clenched fists into a future of outstretched hands." - President Bill Clinton

"Lewis's remarkable life has been skillfully translated into graphics... Segregation's insult to personhood comes across here with a visual, visceral punch. This version of Lewis's life story belongs in libraries to teach readers about the heroes of America." - Library Journal (starred review)

"A powerful tale of courage and principle igniting sweeping social change, told by a strong-minded, uniquely qualified eyewitness... the heroism of those who sat and marched... comes through with vivid, inspiring clarity." - Kirkus Reviews (starred review)

Congressman John Lewis was a leader in the American Civil Rights Movement. He was chairman of the Student Nonviolent Coordinating Committee (SNCC) and played a key role in the struggle to end segregation. Despite more than 40 arrests, physical attacks, and serious injuries, John Lewis remained a devoted advocate of the philosophy of nonviolence. He was co-author of the first comics work to ever win the National Book Award, the #1 New York Times bestselling graphic novel memoir trilogy MARCH, written with Andrew Aydin and illustrated by Nate Powell. He is also the recipient of numerous awards from national and international institutions including the Lincoln Medal, the John F. Kennedy "Profile in Courage" Lifetime Achievement Award, and the NAACP Spingarn Medal, among many others. He died July 17, 2020 of pancreatic cancer in Atlanta, GA.

Andrew Aydin is creator and co-author of the #1 New York Times best-selling graphic memoir series, MARCH. Co-authored with Rep. Lewis and illustrated by Nate Powell, MARCH is the first comics work to ever win the National Book Award, and is a recipient of the Will Eisner Comics Industry Award, the Robert F. Kennedy Book Award Special Recognition, and the Coretta Scott King Book Award Author Honor, among other honors. Aydin's other comics works include writing the 2016 X-Files Annual (IDW), writing for the 2016 CBLDF Annual Liberty (Image), and writing an upcoming issue of Bitch Planet (Image).

Nate Powell is a New York Times best-selling graphic novelist born in Little Rock, Arkansas in 1978. He began self-publishing at age 14, and graduated from School of Visual Arts in 2000. His work includes March, You Don't Say, Any Empire, Swallow Me Whole, The Silence Of Our Friends, The Year Of The Beasts, and Rick Riordan's The Lost Hero. Powell is the first and only cartoonist ever to win the National Book Award. Powell has discussed his work at the United Nations, as well as on MSNBC's The Rachel Maddow Show and CNN.
Add your review
0 stars based on 0 reviews
Add to wishlist / Add to compare / Print